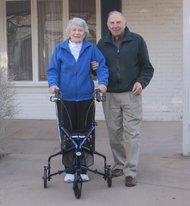 Courtesy of Harley A. Rotbart, M.D.The keeper of the “flog” (fall log) and his subject.

My 84-year-old father-in-law is a “flogger.” That’s the moniker his son gave him because Dad keeps a written record of every fall my 83-year-old mother-in-law takes. She has Parkinson’s disease, and the “flog” (fall log) of her spills has helped her doctors monitor her disease progression and adjust her therapy.

As the incidence of falls has steadily increased since the first one recorded in 2005, my in-laws’ angst about Mom falling has increased in parallel. According to the log, she took 15 falls in 2012, none as serious as the one on July 27, 2009, when she broke her right hip (from which she thankfully recovered uneventfully).

Forty years after Erica Jong’s groundbreaking novel of female liberation, “Fear of Flying,” a sequel might find its protagonist more…

The Boy With a Thorn in His Joints
Ask Well: Exercises for Shoulder Pain