Guide To Walking In High Heels Without Pain 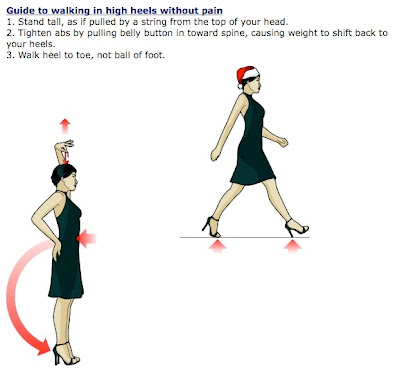 The difference between sultry stilettos and frumpy pumps is three-fourths of an inch, or so says Victor Chu, a former shoe designer who has developed a cottage industry for himself – and perhaps increased the libidos of thousands of men – by training women to walk properly and painlessly in high heels. Chu says high heels and happy feet are not an oxymoron, if only women hold themselves correctly while walking. Last week, he flew in from New York, bringing his prowess to Azalea boutique on Hayes Street to give free lessons in the art of seductive walking – just in time for holiday parties, when even the most practical among us can be tempted by a sparkly sling-back or metallic mule. “Unsexy shoes are anything under 2.75 inches,” Chu said. “A 2-inch heel is a little dowdy. Too classical.” Plenty of people could benefit from lessons – everyone from the fictional Carrie Bradshaw, who took a famously embarrassing catwalk spill in TV’s “Sex and the City” to the real-life runway models for Pucci, Prada and Dolce & Gabbana who fell during Milan Fashion Week earlier this year, and even Miss U.S.A., Crystal Stewart, who took a tumble at the Miss Universe pageant in July – as did her predecessor in 2007. (The YouTube clip has been viewed nearly 3 million times.) Despite the potential hazards, stilettos may do wonders for your love life – if you believe the Italian researcher who reported earlier this year that high heels might improve pelvic floor muscles, which are integral to sexual satisfaction. Other researchers say high heels have something to do with the evolution of primates, wiggling derrieres and signaling sexual availability. Of course, podiatrists have been known to advise patients to stay away from them altogether. More…